Topper is the quintessential example of 'Begginers LUCK'!!!   A young friend, Perry, whom I have known since he was a teenager, had always said he wanted one of my male ridgebacks so when Topper was born I told Perry that 'this was going to be a good one".  Boy has that turned out to be prophetic!  Perry gamely took on the joy of raising his first ridgeback AND first show dog!  Topper entered the conformation ring for the first time shortly after turning 6 months old.  He was an AKC champion by 9 months old!  His meteoric rise hit a high when he won a HOUND GROUP 1 and went into the Best in Show ring at the ripe old age of 8 months!!!  With very limited showing thru his teenage year, Topper regularly won Best of Breed, many times over mature and/or Top 10 ranked ridgebacks.  He easily won his Int'l Champion title earning a Group 2 on the way.  He is like both of his parents - happy go lucky, loves everybody, energetic, enthusiastic, loves to hunt, points like his daddy, never met a stranger!!  He truly inherited the best of the best from both of his parents and has continued to become more impressive in all ways as he ages.  Perry recently moved to Florida with his ever growing family so we decided it was best for Topper to stay here with me, so now he is just hanging out being a dog, and tolerating his monster children who run around.  Two of his puppies, both from the same litter, Neo and Harley, easily also Championed, and more than that they inherited Toppers wonderful personality and flawless genetic testing. His contribution to the KKR family was quick and lasting!!  Topper is a phenomenal example of the breed - fabulous temperament, clean genetics, beautiful conformation, and spoiled to perfection by all who encounter him!

In 2011, a local family came to visit and learn about Ridgebacks, thinking a puppy was in their future.  They fell in love with the breed, mostly because they fell in love with Topper, and took him AND a puppy home with them.  Topper helped raise his daughter, kept the coyotes coming up from the river into the yard, and continues to believe there are no strangers! 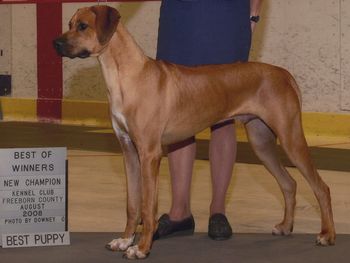 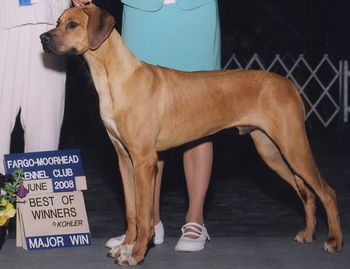 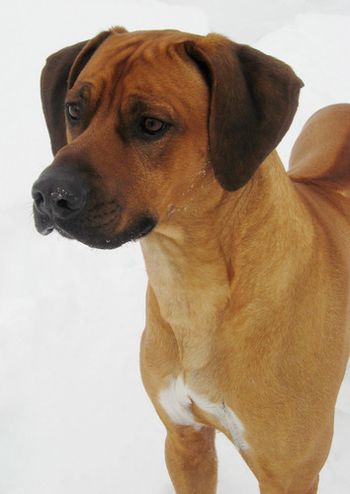 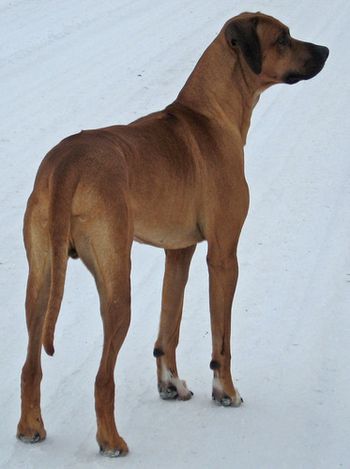 3 years old in the snow 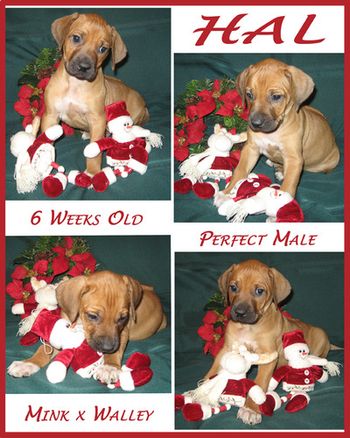 Topper was known as "Hal" from the "Holiday Hounds" Litter 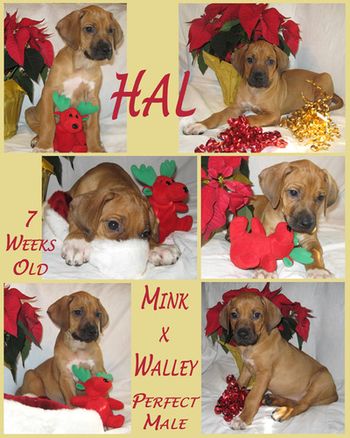 "Hal" is short for Halloween!